Fencing In The Park

A few years ago, Nzingha Prescod was training to qualify for her third Olympic games. But this summer, instead of competing in Tokyo, she’ll be teaching the sport to children in and around Brooklyn through her program Fencing in the Park.

She was still training at a world-class level when a painful hip injury forced her to retire at 27 from the sport that has been her life since she was nine years old. Although it was a disappointment, Prescod had been thinking about what her life would look like after her professional fencing career.

She knew she wanted to stay in fencing and find a way to give back to her community and share what she learned from the sport with the next generation.

“It just opens many doors. It opens your networks, you travel the world. There’s so many possibilities that would not have been even in your purview, even thought of in your mind as a possibility. You’re being exposed to so much being in this space,” she says. “This can change a lot of people’s lives from where I’m from. It changed my life. The people I’m around, it changed their lives, so why not? It’s wrong for it not to be more accessible.”

Prescod says she noticed from a young age how exclusionary sports—especially one like fencing—can be and has always thought about how to use sport to transform and empower communities economically, socially, and emotionally, especially in her neighborhood of Flatlands, Brooklyn. She wanted the children in her community, including her goddaughter, to have the opportunity to get into fencing, which isn’t as accessible as other more mainstream sports.

Facilities aren’t easy to get to from the outskirts of Brooklyn, so it’s difficult for parents to get their kids to the Peter Westbrook Foundation in Harlem—where Prescod first trained. “It needed to be brought to them if I wanted to engage kids from my neighborhood in fencing,” she says.

Last summer, Prescod saw a football coach running drills in a park close to her home. She knew that it would be a perfect place to teach fencing, especially during the height of the pandemic.

Absolute Fencing, one of Prescod’s sponsors, helped provide equipment—and Fencing in the Park was born. 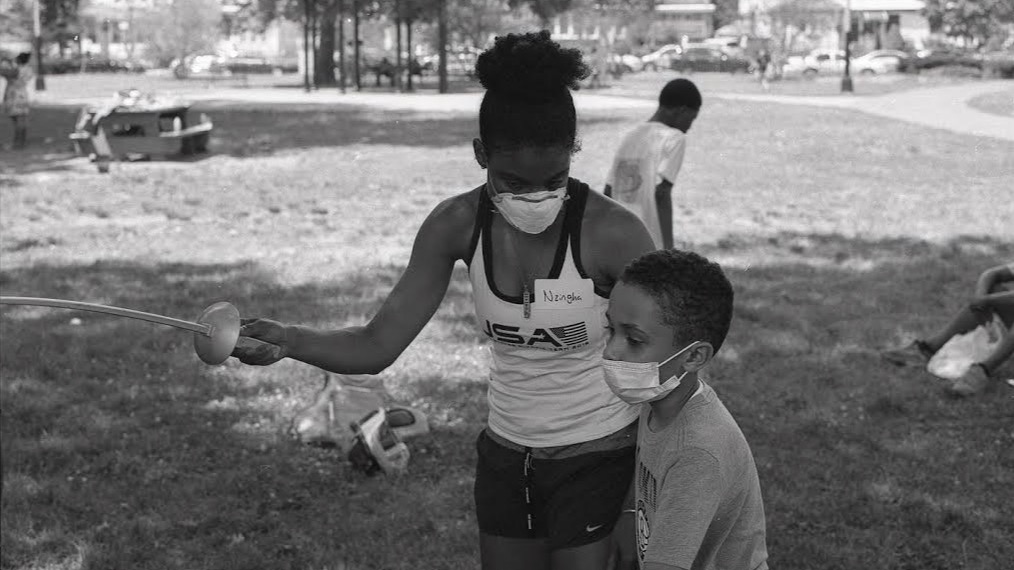 What started out as a six-week summer clinic with 11 children last summer has grown into a consistent group of 25 and is continuing to evolve. Fencing in the Park hosted a spring series earlier this year, worked with schools in Harlem and introduced a high-performance program that awarded two scholarships to three students to continue advanced training. She wanted to make sure that Fencing in the Park was a program that focused on developing children’s life skills through fencing, rather than just introducing them to the sport.

Prescod, her sister and her best friend received scholarships to attend the selective and rigorous after-school fencing program at Peter Westbrook Foundation. Westbrook—a six-time Olympian and U.S. champion—began his foundation in 1991 to teach fencing and life skills to children from underserved communities in New York City and make fencing more visible to people of color. Thirty years later, Westbrook has had a huge impact on changing the landscape of fencing—and has a reputation for training top-level athletes.

Although she was talented enough to enter the program, Prescod says she wasn’t as good as the others in her first year, losing often to her sister and best friend. But, she hated losing and loved the sport because it was more strategic and analytical than any of the other sports that she had played before. Mostly, Prescod says she was inspired by the community and family the organization had built.

“It was just very inspiring as a nine-year-old to enter a space with Black fencers who are achieving excellence in their sport,” Prescod says. “The community is really why I stayed. My friends were there; we were friends with people who had similar backgrounds. I had a really great village of people supporting me, and I was really good from a really young age, so it just made sense. It was never even a thought to stop. Just everything made sense.”

Prescod won her very first national tournament in her age group when she was 10 years old. When she was 14, she won her first Cadet World Championship in the Under-17 group. At 15, she barely missed out on the 2008 Olympic team after placing fifth in qualifiers. She kept training, and competed at the Olympics in 2012 and 2016.

She’s an eight-time world medalist, and one of the most decorated fencers in the country. She earned a scholarship to Columbia University, and fenced at the school not far from where she first trained in Chelsea as a child.

“The sport has been so powerful for me in my life, and I know other people’s lives, so I’m just trying to expand the mission and scale it to more people—because where I grew up, in my neighborhood, there wasn’t access to that kind of opportunity, definitely not an abundance,” Prescod says. “This elite offering of inspiring excellence, enrichment—that kind of caliber of education is not accessible. It’s transformative for people, so it’s necessary. It’s a necessary component of education to have these programs that inspire greatness.”

Prescod says finding funding to support the free clinics was the difficult part of getting Fencing in the Park up and running, but coaching the children in a sport they’re not used to can also be a challenge at times. It’s a balance to encourage the kids, help them understand the value of sport and how it translates to their personal and academic futures, while also making sure they are having fun. She teaches patience, strategy, discipline, commitment and the technical skills of fencing.

“I’m trying to develop a program that is impactful, whether they do it recreationally or at a high performance level,” Prescod says. “That’s really the goal.

“Everyone has such a great time because they’re learning a new skill, they’re learning like life skills of resilience. And then it’s fun for me when I get to raise some fencers and share my mastery of the sport. It’s just good vibes.”

Fencing has long been an exclusive and mainly white sport, but recently Black fencers have made waves on the U.S. team. Ibtihaj Muhammad, another Peter Westbrook Foundation alumna, made history as the first U.S. Olympian to compete in a hijab at the Rio games in 2016, and the women’s foil fencing team has medaled in three straight World Championships from 2017 to 2019.

Prescod knows the sport still has a long way to go in terms of recruiting and retaining athletes, especially on the women’s side, but she’s happy to do the work. She wants to continue to provide sustainable and scalable access so children can experience the same gift that fencing gave her at nine years old. She says this is where she wants her energy to go long term.

“I’m happy to be sharing my sport and being a point of connection to the sport. It’s appealing to have someone who you can identify with and aspire to be like,” she says. “You need that kind of person to bring people along, and to encourage and motivate people, and inspire people to be involved in fencing.” 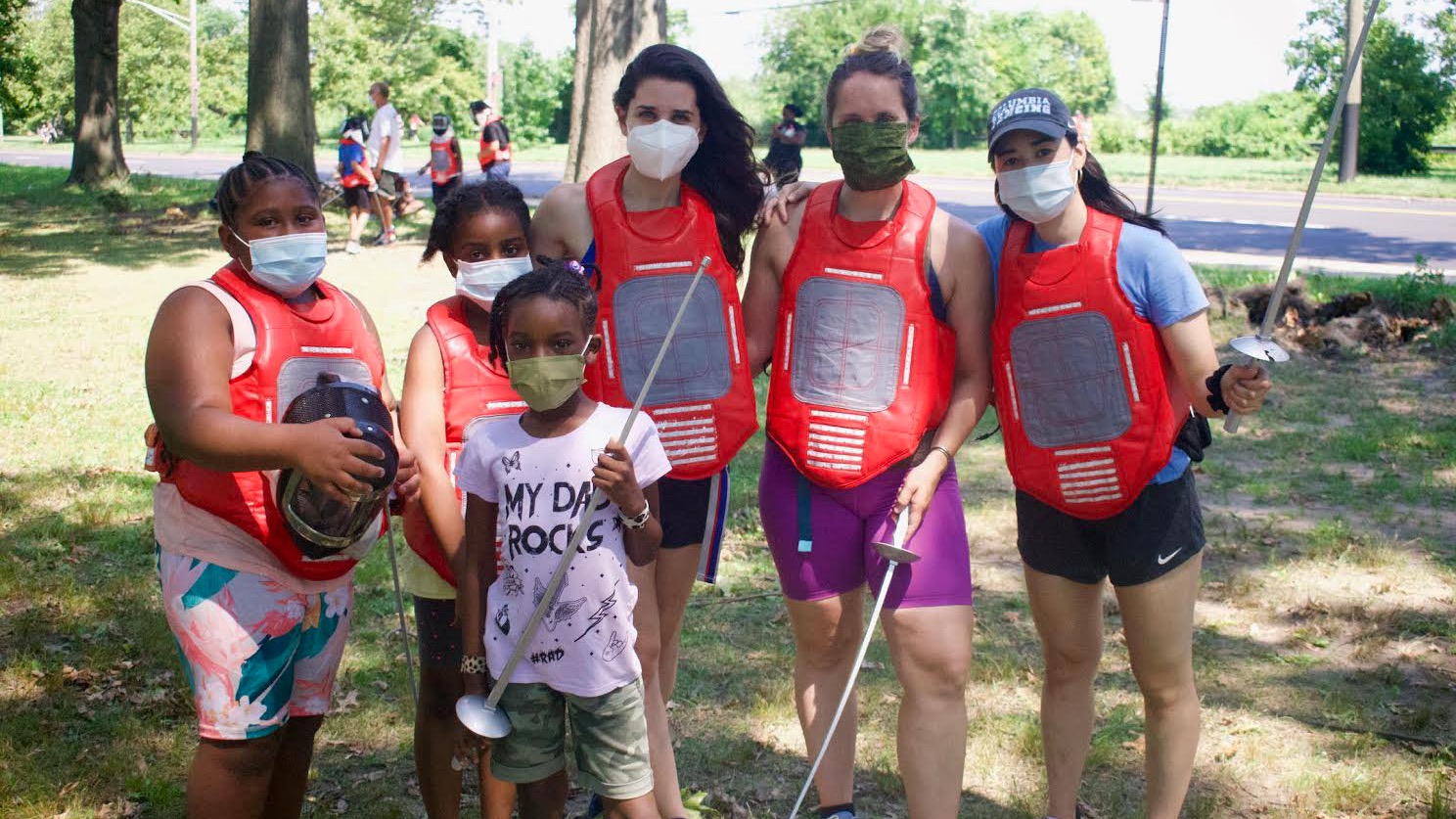