If you’ve seen an NFL official go into the replay booth to review a play, Desiree Abrams may have been one of the people on the phone helping to spot the ball.

Abrams has been an All-Star defensive end, an official and a lifelong fan of the sport. Her work in the NFL began as an instant replay technician and as an official at Baltimore Ravens practices. Now she spends her Sundays as a replay assistant at the Art McNally GameDay Central – the league’s officiating center – in New York.

Thomas and Chaka are visible examples of the many women who have worked tirelessly to break into the NFL. Fans who see them every Sunday are reminded of a truth that is too often ignored – women care about football just as much as men.

Other women, including Abrams, are less visible. But they are also working behind the scenes to ensure the integrity of the game they love, and to hold the door open behind them for more women to break into the NFL’s boys’ club.

“Awareness begets awareness. It’s a matter of making sure you know it’s a possible avenue for you and have the necessary support and exposure. So, I’m going to keep encouraging them by stepping on the field and encourage them to come with me,” Abrams said. “I want to plant the seed that it’s a possibility.”

Back when Abrams was a player, she thought an official missed a call during a game. She did what players do when they feel an official was wrong – she told him.

“Why worry about it?” the official told Abrams. “It’s just women’s football.”

It’s a sentiment that is far too common in the sports world, that women’s sports are inherently less than men’s. For an official working a women’s football game to say it to an All-Star defensive end in the middle of a game shows just how pervasive the dismissive attitude toward women in football is. 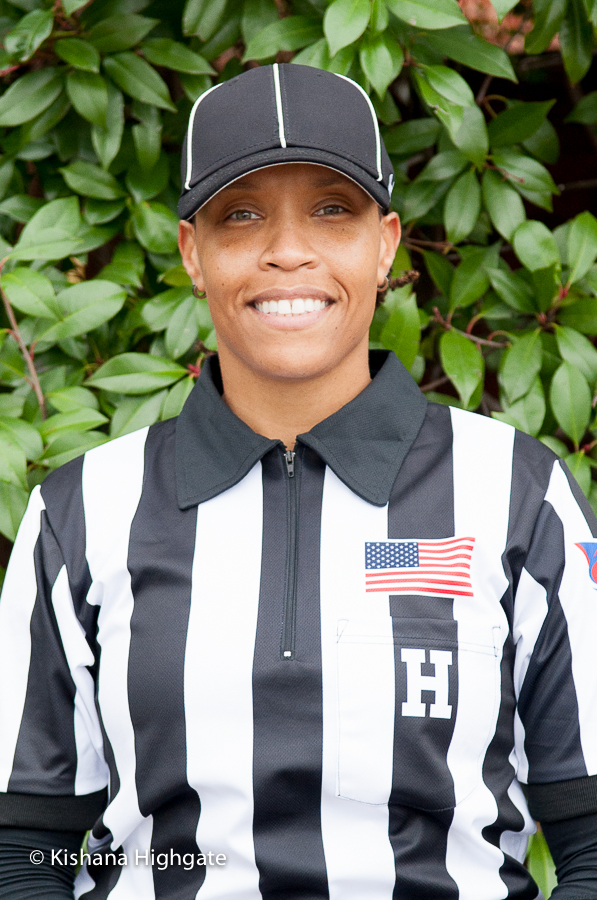 “What does that even mean?” Abrams asked years later, still stunned by the absurd comment. “We sweat every day. We bash helmets. We break fingers. We twist ankles. We travel hundreds of miles to compete against other teams. How is that any different than what the men are doing? I’m pretty sure it’s the same thing.”

There is no singular solution to solve how women’s football and women’s sports in general are perceived by society, but Abrams believes that increased visibility will help lead to more diversity in the football world.

In 2016, Abrams founded the National Women’s Football Officials Association, an organization that strives to train women in the field of officiating and help them network to find job opportunities. Her organization works to pair aspiring women officials with high school and college conferences and officiating boards that can offer them training and opportunities.

She said she traveled with the organization for three years, and despite a general shortage of officials in sports, they found more than 75 women looking to work as officials. The goal is to ensure that women’s football has officials who appreciate the sport, and to help women get more opportunities to work in men’s football.

“I already have my list down of the seven women I want to be part of the first all-women officiating crew to work a Super Bowl,” she said. “This entire movement has really opened up the world to us all, and I hope it continues that way.”

The officiating field is more diverse now than ever before, but Abrams also knows there is still work to be done and still plenty of history to be made. Increasing representation within the officials’ ranks not only opens up new opportunities, but ensures the rules are being applied fairly in all cases.

Abrams said she wants women to know that there are opportunities for them in football, in officiating and beyond.

“Talking to young girls that play who enjoy the game, but maybe don't really want to play and are like ‘Well, is there some other way to be around it?’ Yes, there is,” Abrams said. “There's coaching, there’s gameday management and there is officiating. You can definitely still be around the game.”

Abrams never expected her career path to lead to where she is today.

Abrams wanted to be a veterinarian growing up, which led her to study animal science and veterinary medicine in college. She now works full-time as a national enforcement coordinator for the USDA Animal and Plant Health Inspection Service. She said she usually has a giant handbook of animal welfare regulations sitting in front of her at all times. In that regard, her two jobs are fairly similar, and heavily focused on rules and regulations.

“I’m more of a spontaneous, fun-loving person, but the fact that I study so many rules definitely keeps me in line, whether it’s working from 9 to 5 or from 5 to 11,” she said.

As a former football player, Abrams started on her officiating path already equipped with a deep knowledge and passion for the game. She also describes herself as someone interested in procedures.

“As a defensive player, I always wanted to know what I could get away with,” Abrams said. “As soon as they started talking about the rules in-depth and the things that officials look at, I got a new appreciation for it. I fell in love with it and knew, being kind of nerdy about how things work, that it was going to be the right avenue for me.”

Abrams’s love of football was inherited from her father, Anthony Abrams, who played professionally for the Washington Football Team for one season.

“When I was a little girl, I watched Washington football games with my father and grandfather. I always thought it was such an interesting game,” Abrams said.  “I looked up to my father and really wanted to be around the things that he was doing.”

Abrams played in powderpuff football games in high school and intramural flag football in college. Still, opportunities to play football were few and far between, so she took up other sports including basketball and swimming. 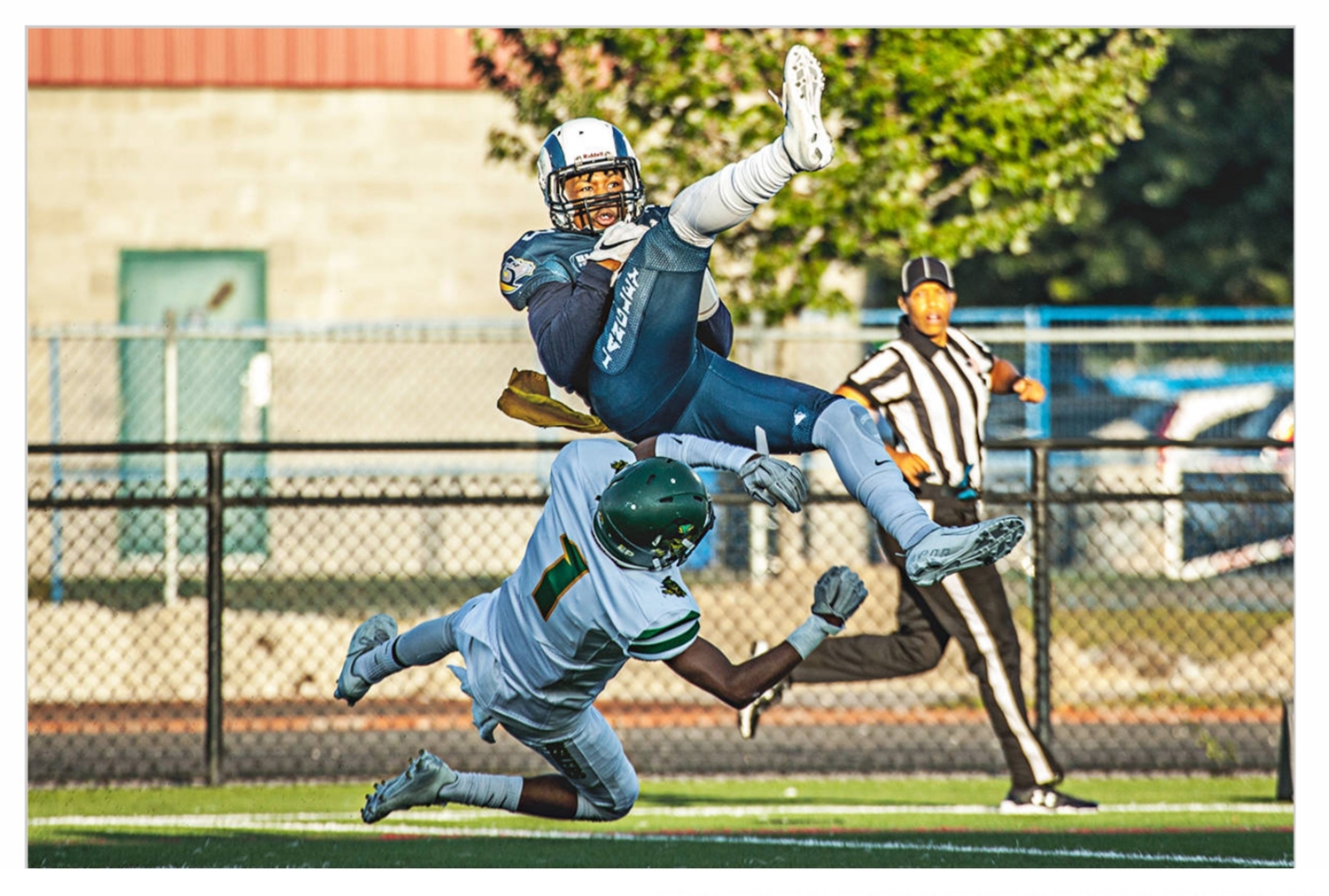 Abrams played two seasons on the Florida A&M University women’s basketball team after walking on as a sophomore. During graduate school, she made her way into amateur boxing where she earned the nickname “No Question.”

She actually asks a lot of questions, but her trainer gave her the nickname because there was no question she was going to win her fights. Abrams won so often that she even had a chance to fight Franchón Crews, the current unified super middleweight world champion, in 2006.

That was the same year that Abrams completed her master’s degree, and learned about the National Women's Football Association, a women’s tackle football league. Abrams came back to play with her hometown team, the D.C. Divas.

When she moved to Georgia for a veterinary program at Athens Technical College, she joined the Atlanta Xplosion of the Independent Women’s Football League, where she was selected for multiple All-Star teams and won a national championship.

After Abrams decided to hang up her spikes following another run with the Divas, she knew she wanted to stay in the game. Coaching didn’t appeal to her, neither did gameday management despite having some background in event planning. She was interested in scouting, but it wasn’t a big role in the women’s game yet, so she didn’t see that as an option.

Divas general manager Rich Daniel, now the owner of the team, approached Abrams about attending the now-defunct NFL Football Officiating Academy. She attended the academy with a fellow defensive player on the Divas. With a new perspective on officiating, she immediately knew this was the path she wanted to take to stay in the game.

“As players, we have a very selfish view of how the game should be called,” Abrams said. “The philosophies behind actual officiating is really admirable with how the game is operated. I just fell in love with it.”

It wasn’t long before Abrams made her way up the ranks from high school and intramural leagues to the collegiate level. She’s served as an official for the University of Maryland, Howard University, Bowie State University, Catholic University and Fayetteville State University, and has even officiated a Big Ten scrimmage and the 2019 Centennial-MAC Bowl.

Abrams has experience working in every position an official can have on the field: referee, umpire, down judge, line judge, field judge, side judge, back judge and center judge. Now she’s exploring opportunities off the field, and is making sure other women know there are opportunities for them, too.

“It's not to say that the field doesn't have its challenges,” Abrams said. “But I think if you just set your goals and what you want to do, and keep pushing, taking the advice of your mentors, surrounding yourself with people who believe in your possibilities to succeed, you can overcome anything that might stand in your way that may seem like a hurdle.”

The Role Of A Lifetime